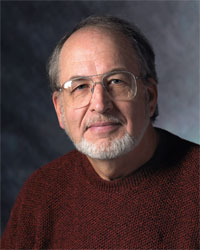 Ron Van Gilder earned his Bachelor’s Degree from the Minneapolis College of Art and Design focusing on graphic design and printmaking.

A keen interest in life drawing resulted in his winning the schools’ figure drawing competition in his senior year. Ron correlates his study of human anatomy with his ability to accurately represent the structure of animals.

Ron was drafted and served three years in the army during the Vietnam Conflict. He trained at the military photography school and was assigned, as a photographer, to the United States Military Academy at West Point. Photography would become invaluable as a reference gathering tool in his future work.

Ron believes the popularity of his art is the result of painting from his own personal experiences. He thoroughly enjoys the outdoors and is an avid sportsman. “My paintings reflect these encounters and are my way of sharing the experience. I hope that others will appreciate the places and subjects I find so enjoyable to paint.”

With nearly 150 limited editions in print, Van Gilder’s success is indisputable. He has been named as the “Artist of the Year” for Boy Scouts of American, The Minnesota Waterfowl Association, Minnesota Ducks Unlimited, and the Wildlife Heritage Foundation. Ducks Unlimited has twice named him “Flyway Artist of the Year” and in 1990 he was given DU’s highest artistic honor as the “International Artist of the Year.” He has also designed state duck stamps for Minnesota and Maine. In 2008 a book “Brushes with Nature – The Art of Ron Van Gilder” was released covering his amazing artistic career.

As a dedicated sportsman Ron Van Gilder is involved in efforts to assist in the preservation and reclamation of natural habitats. This dedication inspired the restoration of a marsh on his own property in central Minnesota where he lives with his wife Holly and their son Forrest.