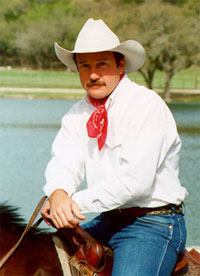 Jack’s maternal grandfather was a rancher and a cowboy who rode on some of the last great cattle drives out West. His paternal grandmother was a painter who vividly captured the people and landmarks of Texas. From his earliest childhood days, Jack Terry found himself immersed in the worlds of both cowboys and canvases. And from the age of three, he worked to perfect the talent that has made him one of America’s most honored Western artists.

Young Jack was just a toddler when he began drawing side-by-side with his grandmother while she painted. By the time he was nine, he had developed his own special style. “I did a still life of an old cow skull, a boot of my grandfather’s, and a Mexican serape, and entered it in the Scurry County Fair. I won a blue ribbon on it!” That became the first of more than 130 awards Jack Terry won by the age of 16 for his still lifes, landscapes and Western art.

Meanwhile Terry spent time with the ranchers and cowboys from his grandfather’s world, a habit he kept up throughout his formative years. Even after graduating from the University of Texas in Austin, he took every opportunity to do day-work on various ranches in search of inspiration and new subject matter. While in college, Terry majored in journalism and minored in art. By the time he earned his degree, he already had paintings displayed in galleries throughout Texas.

Austin was quite the Western art center in the early 1970s, and Terry took full advantage of the opportunity to work with the great painters who spent time there. He credits Melvin Warren with helping him to perfect his understanding of both human and equine anatomy, and James Boren with assistance on perspective. Porfirio Salinas and Dalhart Windberg taught Terry about landscape painting, while Edouard Cortes fascinated the young artist with his methods of capturing light on canvas. Says Terry of his association with Cortes, “He painted Paris street scenes and I learned a great deal from his work. In fact, we showed in the same gallery in Austin. I’ve always been fascinated by the French use of light, reflection and shadow, which has influenced even my western art and techniques.”

Terry’s big break came at age 26 when he was named bicentennial Artist in Texas. That led to a one-man exhibit in the Texas Rotunda, and a commission to paint the late President Lyndon B. Johnson for publication on the Texas Bicentennial Calendar. In 1976, Terry opened the Cotten-Terry Gallery in Austin, which he ran until 1979. By that time, oilmen were short on money, and Terry’s cowboy paintings had become more difficult to sell. Ever resourceful, he drew upon his own observations and his eclectic training to add Victorian women subjects to his collection. They sold to a whole new audience of admirers, and soon Terry was back on top. Today his repertoire includes both the Western and cowboy art for which he’s best known, as well as landscapes, Victorian images and street scenes.

Many of Terry’s paintings are inspired by the places he has visited and people he has met. “A lot of my subjects are friends as well as various ranches that friends own. I still like to go out and ride and work cattle. We go on trail drives and round-ups, which provide the perfect opportunity to take lots of pictures. Then I paint my favorite scenes and feature my friends.”

One of Terry’s favorite paintings was inspired by one of the many stories passed on to him by his grandfather. The piece is entitled “If It Weren’t For Bad Luck,” painted in 1990. “It was based on a story that my grandfather told me when he was working cattle from the King Ranch and driving them up to Kansas at a time when Texas still had buffalo. During a big storm, they were coming over a hill – the cattle spooked the buffalo and there was a huge stampede – a story I recalled from an early age, which I later captured on canvas.”

In addition to his many successful one-man shows and associations with galleries, Terry opened his own Jack Terry Fine Art Publishing business in 1990 with his wife, Mary. Since then they have published more than 65 limited-edition prints on canvas and archival paper. Each canvas is individually hand-painted to add highlights and texture and to give them the look and feel of an original oil.

The Terrys travel extensively in search of new subjects for Jack’s paintings, and also to visit collectors and dealers in stores and galleries around the country. “I’ve met a lot of nice people that way,” Jack comments. “I’ve really enjoyed working with the individual store owners doing signings and making friends with our collectors. They are very serious about what they collect. They know what they like and I admire that. Most collectors appear to be passionate about the art.”

One of Terry’s admirers, six-time PRCA World Champion cowboy Larry Mahan is among those passionate collectors. As he says, “Terry captures the West the way it was and the way it should be. He is one of the finest artists of our day and a pretty good cowhand to boot. His horses, cowboys and landscapes are as good as it gets.”

In 1999, Jack wrote and illustrated his first book, “The Great Trail Ride”, a collection of inspirational short stories. “The Great Trail Ride” is currently in it’s ninth printing. That same year he also painted a series of sixteen paintings for “Child of the Promise”, a book by celebrated author Stormie Omartian.

In 2000, Jack wrote and illustrated his second and third books, “A Cowboy’s Faith” and “Reflections of a Horseman”. In addition, he illustrated a ladies book by author Dee Appel titled “Friend to Friend”. “Prayers Along the Trail” and “Wide Open Spaces” (Alaskan fishing trip) and Jack’s newest project, “Good Ol’ Cowboy Stories” is in bookstores now.

Jack was the featured artist for the San Antonio Livestock Show and Exposition for four years in a row. He has also completed his third painting in a series for the Former Texas Ranger Foundation as a fund-raiser for their new History and Education Center in Kerrville.

Today, Jack and Mary Terry reside in Georgetown, Texas. Jack spends as much time as possible at his 250-acre ranch – which Terry calls his “little piece of heaven” – just north Georgetown, where they raise cattle, horses and exotic deer. “We live in the hill country, where we have horses and deer, including exotic deer from different countries – Chinese, African Black Buck, and deer from India. We have a lot of large oaks, pecan trees, springs, as well as good acorn crops – a deer’s favorite food,” explains Terry. A hard-working artist as well as part-time rancher, Terry has his morning chores done daily before 8:00 or 8:30 a.m., when he sits down to work in his studio.

Jack and Mary Terry have two married daughters and 5 young grandchildren residing near Georgetown and Dallas.