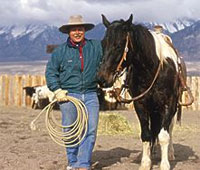 “The Spirit of the West has moved me, a guy from Pittsburgh, PA, ever since that day 32 years ago when I drove into Colorado and saw my first cowboy riding with his herd under the Rocky Mountains,” reflects David R. Stoecklein.

Stoecklein launched his photographic career taking lifestyle shots of skiing, fishing, hiking, and biking, landing assignments for companies such as Coca-Cola, Ski Magazine, L. L. Bean, Reebok, Timberland and Scientific Angler. It was not long, however, before he turned his lens to his neighbors on the great ranches of the West.

David’s fascination with the ranching heritage of the American West led him to befriend, and subsequently photograph, the men and women still breathing life into the mythical figure of the cowboy. Documenting today’s West quickly became his personal mission. David’s concern for preserving the traditions and beliefs of our country’s honest, hard-working cowboys and cowgirls gradually earned him their respect. With that respect came an open invitation to share in their lives, and the great responsibility to honor their trust. As put to David by the fifth generation Texas rancher, Tom Moorhouse, “the work you are doing is very important to us. You are preserving the West, which is my family and the families of my friends.”

David Stoecklein resides in Idaho with his wife, Mary, and their three sons, Drew, Taylor, and Colby, where they split their time between their home in Sun Valley and their ranch in Mackay.